Lakeside Area Will Get 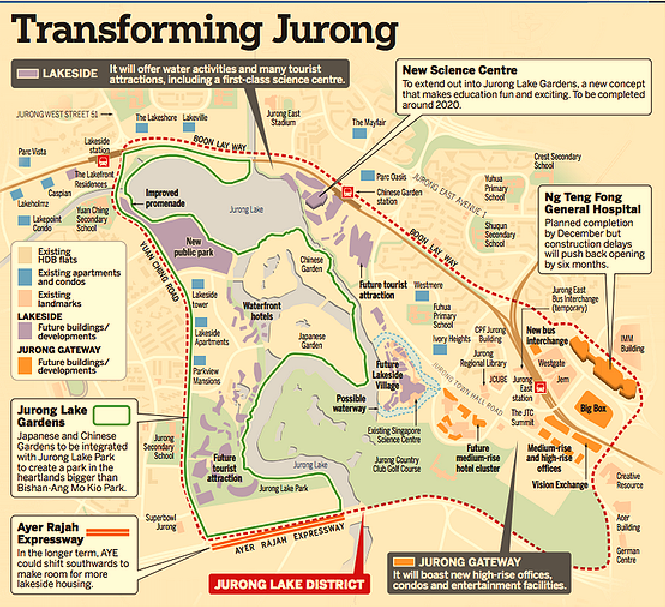 Residents in Jurong can look forward to a more vibrant neighbourhood, starting with an expanded Jurong Lake Gardens that will combine the existing Chinese and Japanese gardens and Jurong Lake Park.
The upcoming “people’s garden” will also include a new Science Centre which will be completed around 2020, said Prime Minister Lee Hsien Loong.
These plans are part of a larger transformation of the Jurong Lake District over the longer term and are about making every corner of Singapore an outstanding environment in which to live, PM Lee said at the National Day Rally.
Last year’s rally shone a spotlight on development plans for Changi, Paya Lebar, Tanjong Pagar and Tuas.
This year, it was Jurong’s turn.
The district has come a long way from its origins as a swamp decades ago, said Mr Lee. The Jurong Gateway part of the area is now a new commercial region with several institutes and shopping malls.
But the other part of the district, known as Lakeside, houses gardens which look dated and “under-utilised”, said Mr Lee, who visited them in June. “I felt we could do much more,” he added.
The entire area has potential to be transformed in an ambitious manner, he said. For example, the lake can be reshaped and the gardens merged to “create one beautiful set of gardens in the heartland”.
And Jurong Lake Gardens can be a place where community gardeners can create and maintain “show gardens”.
The National Parks Board will call for garden design ideas next year, and Mr Lee asked Singaporeans to chip in with suggestions.
The “jewel” of the Lake Gardens will be the new Science Centre, which will be built on the north shore near the Chinese Garden MRT station.
Nearby flats and park connectors, as well as the spruced-up Jurong River, will be integrated with the gardens.
Mr Lee added that the upcoming Jurong Region Line and Cross-Island Line, together with the improved North-South and East-West MRT lines, will improve traffic in the region.
In the longer term, the Ayer Rajah Expressway could be shifted to create more space for lakeside housing, making it as pleasant as living near Bishan-Ang Mo Kio Park or Punggol Waterway.
The terminus for the Singapore-Kuala Lumpur High Speed Rail may even come to Jurong.
Said Mr Lee: “We’re discussing with the Malaysians. We haven’t settled this yet, but if we get the High Speed Rail terminus in the Jurong Lake District, then that will make Jurong a truly exciting gateway to Singapore.”

Connect with us via WeChat